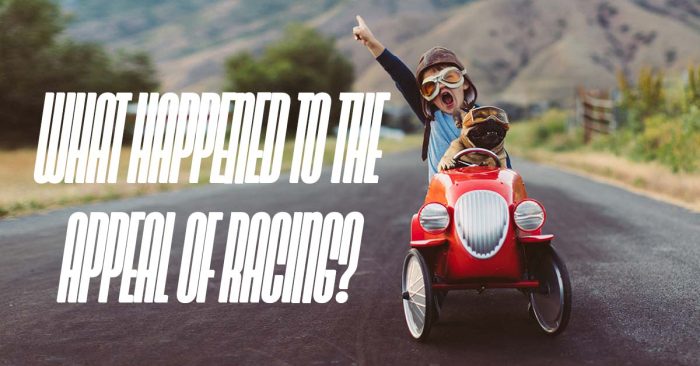 Throughout history, racing has always had a certain appeal for humanity. One person racing another, chariot racing, boat racing and a whole host of animals ranging from horses and dogs to camels and pigs. But something has happened over the past decades that has limited the appeal of racing in many of its forms. Here’s a quick look at why racing as an overall activity may be losing its appeal.

Auto Racing
Early auto races were based on speed, distance or both. Auto racing was exciting because the goal was to see how fast one could go when competing with other cars and drivers. But that changed when cars were able to travel at speeds faster than was safe for drivers or fans. Speeds had to be limited, which took away some of the basic appeal of the sport. In fact, cars today travel at lower speeds than in the 70s. It also was hampered when open wheel racing splintered into the Indy Racing League in 1996 and when “team” racing was introduced into NASCAR.

Horse Racing
Once the sport of kings, even horse racing’s biggest races like the Kentucky Derby, Pimlico and Belmont have trouble gaining attention in the national media today. Harness racing and races like the Little Brown Jug have fallen off the map. Many attribute this to more awareness of animal cruelty issues. Others have found different forms of sports wagering are more available. In either case, the most popular days of horse racing would seem to be behind us.

Dog Racing
Dog racing was once an exciting, exotic way to enjoy racing with little human involvement. Other forms of gambling and a growing concern for the health and safety of the dogs has put the squeeze on the sport. In recent years, 44 dog tracks have ceased operations and pari-mutuel wagering on dogs is now legal in just three states, including West Virginia, Iowa and Arkansas.

Track
It doesn’t get more basic than humans racing each other under similar circumstances at the same time. There was a time when the fastest humans were household names. Track and field events gain interest every four years around the Summer Olympics, but other than that, speedy humans gain little attention, especially when compared to the past.

Are your insurance rates competitive? How would you know unless you compare? Connect with one of our independent agents to get a free price quote on your auto, home, life or business insurance. We look forward to assisting you.